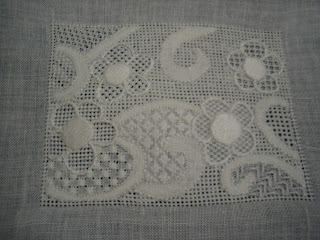 This is my Dresden Lace EGA correspondence course piece.  I truly did not think I would have it finished before the turn-in date, but it is finished, complete, rinsed, washed, ironed and done!

And, despite hearing Pod's voice in my head, I did not go blind.  And I only stabbed myself with the sharp needle once.

The other thing I finished was Jim Butcher's "Changes," the next to last book in the Harry Dresden series.  For those who don't know Harry Dresden, he's a wizard, just like the other Harry--but this one lives in Chicago, works as a private investigator, and has a delightfully snarky sense of humor.  The latest book in the series, "Ghost Story," has spent the last several weeks on the bestseller list.  It took a little longer for this one to come out, and it had been awhile since I read the series, so I've spent the last few months re-reading the entire series before diving into "Ghost Story."

I highly recommend the series, and I suggest reading the books in order, since the stories build on each other.  It's also interesting watching the writer develop. The writing improves with every entry in the series--in rereading, I found the first book, "Storm Front," less compelling than I did on the first reading--mainly because the characters have grown in complexity, the moral issues have become more profound, and the author's skill has increased in bringing them together.

SyFy did a series loosely (very loosely) based on the books several years ago.  It was good escapist TV if you like sci fi (and we do in this household), but it does not hold a candle to the books.

I'm also reading Alison Weir's book on Henry VIII and his six wives and watching The Tudors on DVD.  But that will be a rant on another day.