My version of Elizabeth

Gay Ann Rogers has a gallery of Elizabeths on her website (www.gayannrogers.com)--a little hint of something to come, I think.  Anyway, this was a piece I proof stitched for her last year.

And this is mine: 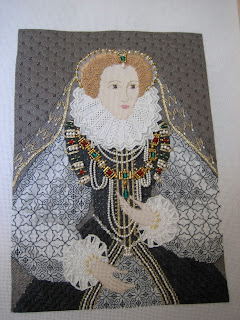 (There's a better picture of her in Gay Ann's Gallery.)

Elizabeth was fun to stitch, but there were challenges along the way that required me to make some decisions on my own.  I don't think that's a bad thing because it means that the piece becomes your own.

The first challenge was this:  the basic part of the portrait was counted--then, when it was time to stitch some of the more "fluid" areas, I needed to trace part of the design.  However, as sometimes happens, the piece of Congress cloth I had was more loosely woven than the piece Gay Ann used to stitch the original.  This meant that mine was larger overall, which meant the outside edges didn't fit the tracing.  I could have gone whining to the teacher and demanded my own personalized tracing (hate it when people do that, so I'm not going to start) or I could have located a more tightly woven piece of Congress cloth and started over (SO not going to happen!) or I could figure out how to handle the problem.

Which is what I did.  If you look at Gay Ann's Elizabeth and then at mine, you'll see mine has a more "bombastic" sleeve (which Jane Zimmerman says is the proper term for those oversized sleeves) and my Elizabeth has more veil.  Actually, I kinda like it since it's unique.

The second challenge was the background.  There's a lot of basketweave under that background. A lot of it.  It's like the Energizer Bunny, it just keeps going and going and going . . .so I set aside a certain amount of time to do background, then I allowed myself the privilege of working on linen for awhile (remember, I was proof stitching, so I had a fairly tight deadline).  In the end, though, those miles of basketweave became soothing, good to do when I'd had a long day at work and my hands needed to be busy but my brain didn't.  And the overlay stitching was just plain fun.

The third challenge: beads. This is before I discovered the Bohin beading needles, so this involved regular beading needles.  This involved pearls with holes that sometimes didn't go straight through the pearl.  This involved lots of OTHER types of beads to create all the jewels.  Which, because of the the different size of my Congress cloth, required making some decisions about spacing.  All of which made me bugnutz crazy.  BUT those pearls (and they are real pearls, not pearl-like beads) and jewels (which are beads and not real jewels) make Elizabeth what it is.  Without them, Elizabeth would not have been Gloriana herself.

She is not framed since I am hoping that Gay Ann will teach Mary, Queen of Scots, and Bess of Hardwicke.  If she does, I want to frame them all in similar fashion.
Posted by Ann at 4:19 PM