I have spent the whole afternoon filling cross stitches in one of the hills at the bottom of Rebecah French's sampler. The whole afternoon, and there are still more to go. I think having to stop and fill in tiny little compensating stitches around the design has significantly slowed me down.

But there's only a little more of this hill to fill . . . 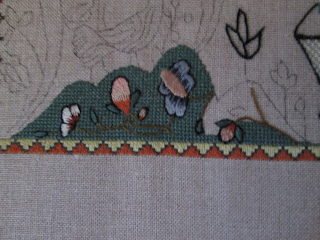 Maybe if I stitch a little longer tonight, I can get it done before Sampler Sunday ends.

I did not thread a needle yesterday. I played games on my phone and talked to The Saint and Baby Girl and puttered around the house and nary a stitch was stitched.

I also baked a loaf of banana bread, which leads to an Old Married Couple story. If you just came for the stitching, stop here.

To make banana bread, you need to mash up the bananas. The easiest way to mash bananas is to use the potato masher, which is what I was doing when Dearly Beloved wandered in. Lord knows, I might be doing something fascinating that he could miss if he isn't there to observe.

So, he asked what I was doing. I said I was mashing bananas. But, he said, you're using the potato masher. I replied that in all my years of cooking and baking and wandering through kitchen supply stores, I had yet to find a banana masher, so I was using the potato masher. He felt the need to say, "But it's a potato masher." At which point I mentioned that if he ever wished to taste my banana bread again, he would remove himself from the kitchen and not worry about which utensil I was using.

I feel that I should send this to the guy who writes "Pickes" for the comics.