We had planned to put up the Christmas tree today. Dearly Beloved did something to himself in getting it out of the closet, so we now have a box in the corner of the living room instead of a tree. He finally gave up and took a muscle relaxer and feels much better, so hopefully tomorrow will see the tree instead of the box.

So, instead of putting ornaments on the tree, I finished putting one together. 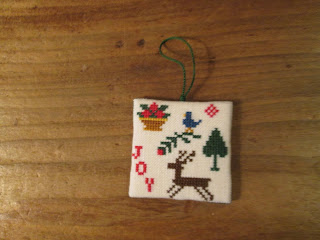 This came from one of the JCS Christmas Ornament issues, but I do not remember which one nor do I remember the designer. I think it's very sweet, and wish I could give credit where credit is due. I do remember that I stitched it as part of an EGA program on the way I put ornaments together. I stitched several ornaments and had them in different stages of the finishing process for demonstration purposes. I know I had a couple that were almost done, and those have been put together and have been living on the tree, but I have a feeling that I will excavate a few more before it's all done.

Stash diving does result in finding some surprises.