Maybe I should say Frustrating Friday.

I had been a little concerned about the number of threads outside the edge stitch, and I should have listened to myself. When the threads starting pulling out just from stitching through on the last side I needed to attach I came very close to having a sinking spell. This would have required lying down with a cold compress and I had other things to do.

All I can say is Stitch Witchery is my friend.

And the needle book is assembled. 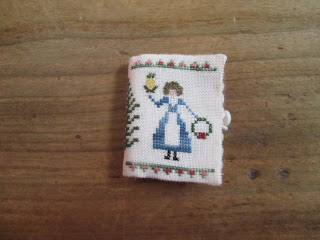 This will likely never be used for its intended purpose, it will be put on display at Christmas, so I'm not horribly concerned about the fraying and the fix.

It would be logical to go ahead and assemble the tray. The only problem is that I need to make new templates. After I had stitched the first piece of the tray, I realized it came out bigger than the template for the bottom of the tray. This has happened before--just because a linen count says it's 32 or 36 or 40 or whatever, there are enough variations in thread thickness and linen weave to throw that count off slightly.

So I'm going to photocopy the finished pieces and make my own templates.  Just not today. Today Carmen is calling and I'm going to work on embellishing instead of assembling.

I'm ignoring the fact that Carmen will eventually have to be assembled.