When I started home yesterday, I was positive I was going to pull something out of the auxiliary finishing basket to work on. After all, the lid won't shut any longer. If I were of a fanciful bent of mind, I would say that there are projects just trying to escape so they could become something, but as I am not of a fanciful bent of mind, I won't say that.

Instead, Frances Burwell was glaring at me.

Do you see this innocent-looking, very innocuous acorn band? 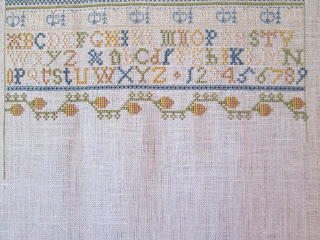 Let me tell you--if there were a way to miscount, I miscounted. There are only three colors in this band. I pulled the wrong color for part of the acorns and had to rip them out. I finally had to put Frances in time-out before she became a fancy dust cloth. She's been there for several weeks--or maybe a month or two.

So, last night, I finished ripping out what needed to be ripped out and restitched the sections I had ripped out. Today I finished the band.

I believe I will continue with Frances for another day or two.

Until those projects attempting to escape grab me and force me to take care of them.
Posted by Ann at 3:39 PM