Sidetracked, then off the rails

Yesterday I decided to do my usual Saturday domestic diva chores, which would then give me another two days for uninterrupted stitching.

I had some time last evening after finishing the last bit of spit-and-polishing I was going to do, and I picked up another of the small strawberry pieces from Barbara Jackson.

And finished the stitching: 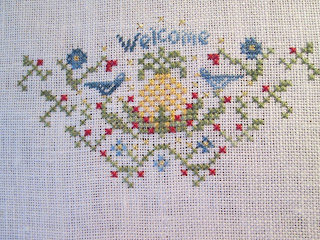 This may be the last thing I ever stitch.

Today, I have just about decided to sell my stash, turn in my needles, and take up parasailing instead of needlework.

Everything I have touched has been a disaster.

I was going to work on the casket toy.  Detached buttonhole is one of the those stitches that I can generally do with my eyes closed. Today I couldn't do one with both eyes open, with additional magnification, in broad daylight.

So I decided to thread up my sewing machine and do a wee bit of finishing. The less said about that experience the better. The sewing machine is among the things I was thinking of selling.

I usually have very good luck stitching samplers, so I pulled Frances Burwell out of her pillowcase. I miscounted within the first four stitches. So all that I did had to be ripped out.

I was stomping around, flinging invective (which was safer than flinging other things)--Dearly Beloved suggested that perhaps it would be a good idea to do something else before I made decisions I would rue.

So tonight I am going to leaf through a few of the magazines that have accumulated beside my chair.

None of them will have any needlework in them.
Posted by Ann at 3:19 PM