And now for something completely different

I bet you thought you were going to see the next step on a casket toy.

Early this morning I was seeing my doctor because I was hit with a case of vertigo last night. Apparently the slightly nagging headache I've had has not been eye strain from stitching myself silly, but the beginnings of an inner ear infection. My ear never hurt. I have meds and the headache has already disappeared, although the anti-vertigo drugs make me a little drowsy and apparently a little loopy.

Then I spent the middle of the day with the AC technician since the hall in front of the closet where the AC unit lives became squishy at some point. He called the plumber. The plumber came and cleared out the drainage pipe. The AC guy came back and fiddled for awhile. Then he left and Dearly Beloved had to excavate the swamp fan (aka big honkin' fan) to blow over the squishy parts of the carpet and dry them out. I've wanted to replace the carpet for awhile, but would prefer to do it on my timetable.

After all this excitement (and unexpected expense) the last thing I needed to wield was a sharp, pointy object.  A pointy object with a blunt end might work, which meant stitching not on silk fabric but on linen or canvas instead.

And I came up with this little lovely, which I started a couple of years ago. At the time, I had the flower at the top and the ABC. I stitched the rest this afternoon after all the excitement died down. 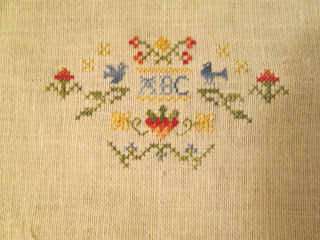 It will become this: 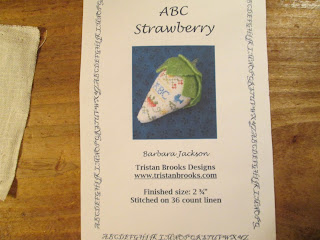 Barbara Jackson's colors are so joyful that they make me happy.

And who's to say I can't put strawberries in my casket, too?
Posted by Ann at 5:57 PM