Since last I wrote:


I'm beginning to feel that all I do is spackle and patch my decrepit body.

I can already hear somebody asking how you can throw your back out standing at an ironing board. I have some age-related (there's that decrepit and aged thing again) deterioration of the discs in my lower back.

Actually, the doctor called it a degenerative disorder--but that sounds as if my back were doing something bawdy and naughty. I wish. Nope, it has to do primarily with age.

Anyway, I was fiddling with finish-finishing a silly little thing and the directions said to finger press the seam. Apparently my fingers are too cold to finger press anything because the seam was not staying where it was supposed to. So I decided to threaten it with a hot iron. It's a very fiddly little bit of nonsense and I fiddled and bent over and fiddled and bent over and finally my back announced that it was tired of being placed in such a position for so long and I got stuck. And it hurt to straighten up. And when I stretched to try to get the kinks out, something popped. And that was that.

Dearly Beloved said that I am the only person he has ever known who could injure herself trying to iron something. I asked him why he thought I keep saying that housework, done properly, can kill you. He said that I wasn't doing housework, I was doing needlework. Apparently the look I gave him was enough for him to decide to take a stroll around the neighborhood for a few minutes.

So my finish-finishing has not been touched. The only thing I've managed to accomplish this week is trimming, pinning, and basting the hem on Isabelle so she is ready to be hem-stitched. 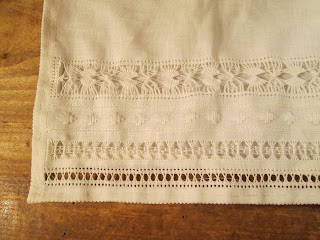 I probably won't get this hem-stitched this week-end. We are heading to the mountains to visit The Flash and his parental units.

Right when I need to be in fighting trim.