There has been a little stitching: 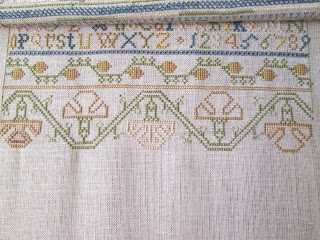 Frances Burwell has been my focus project this week.

And that child has been messin' with me.

Some of those little sprigs coming off the vine line up with each other. Some don't. Some are stitched just like others. Some aren't. There have been times when I thought I needed to rip out--and almost did--before I discovered that Frances was not, perhaps, as careful as she could have been when stitching the band.

And then there is the decrepitude factor. This has nothing to do with stitching so if that's why you're here, you can go on to other things.

The wonkier of my wonky knees has been giving me problems. And I keep reinjuring my Achilles tendon. So I finally gave in and went to the doctor, who mentioned that perhaps I should come to see him when things start to hurt rather than when I can barely hobble.

I got a shot in my knee--which sounds much worse than it actually was--and I am now wearing a lovely boot that immobilizes my ankle so the torn tendon can heal.  And I am to continue to keep my foot elevated and iced.

Which means I should probably stitch rather than vacuum.