My Christmas mojo has apparently deserted me.

By now the halls are usually decked, we're eating from the Christmas china, and the tree is decorated. There should be Christmas movies playing on the TV and Christmas music resonating through the house.

Well, we have a tree.

I just can't get going this year on decking the halls and embracing the season. Not sure why, but I think I should just start answering to Grinchetta and move on.

And to top it all off, nary a stitch has been worked since I got home from Williamsburg.  This is the extent of my needlework thus far this week: 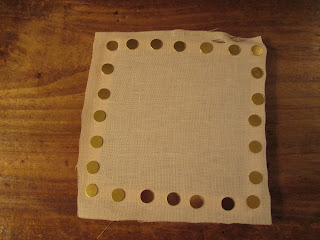 I've managed to get the linen attached to the stretcher bars for this year's Barbara Jackson ornament from SNS.

I haven't even gotten it basted.

Do you suppose there's a correlation between lack of stitching and lack of Season's Greetings?
Posted by Ann at 4:22 PM