Angel . . . and a little devilment

The third of my three "work" angels is stitched: 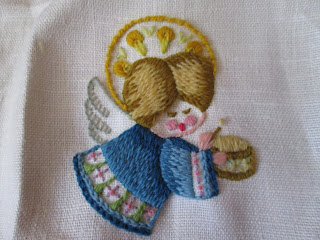 There is only one left to stitch. I sort of wanted to have them all done by Christmas . . . which is in three days . . .the fourth one may become a "nonword" angel.

I've also finished the satin stitch alphabet and started on the tiny cross stitch one on Rebekah French. 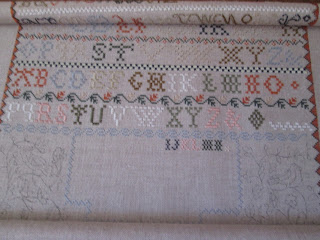 And I've run out of the white silk I'll need for part of the next step on this sampler.  In the grand scheme of things, running out of a thread is a minor irritation, but it makes me bugnutz crazy when it happens in a kit.

So I'm currently bugnutz crazy about this.

I am not bugnutz crazy about Christmas, though. I've just decided to enjoy what I've done and forget about doing any more. I told Baby Girl last night that you wouldn't know it was Christmas around here if it weren't for the tree in the corner and the wreath on the door.

Because we frequently have warm Christmases, I gave up on "real" wreaths years ago. Without natural refrigeration, they tend to get brown at an alarming rate. So we've had a series of artificial wreaths over the last few Christmases.  The current one actually looks pretty good, with pine cones and holly berries and a little bit of very subtle glitter here and there.

I drove up the other day after work to find one of the hordes of neighborhood squirrels dangling off the hook that holds the wreath.  As I strolled toward the door, he said some quite unkind and unpleasant things to me and I said "shoo" which seemed logical at the time. He dangled for a few more minutes and I said "shoo" a little louder, and he finally took off.

I do not wish that devil of a squirrel death as a result of his nibbling--but I do wish him a terrible tummy ache!