When last I worked on her, I had decided I probably didn't have enough silk to fill in the sawtooth border around her, and that I needed to order more. Since we don't have a shop nearby that carries AVAS, that meant I would need to add it to an online order. I didn't want to order it alone since I had a feeling that the shipping would cost as much as the silk, so I was going to add it to another order at some point.

I've placed two online orders since I made that decision.

I didn't remember to add the silk on either order.

Last night, my eyes were too tired to handle 40 count linen or white silk on white linen, so I was looking about for something else. And there was Rebekah.

The directions say to use two strands for the filling. Hmmmm, thought I, what I could do is work with one strand in the dye lot I currently have. Then, when I finally remember to order another skein, I could just go around again and add the second strand. 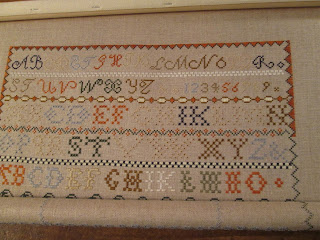 And when I looked at it more closely, I realized that one strand was doing a very good job of filling in. 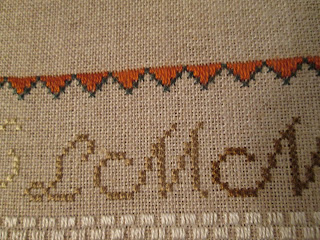 I thought perhaps I should try adding another strand just to see if it made a major difference.

The second strand made everything too tight and was distorting the linen--so out it came, and one strand it is!

I no longer need to remember to add this to a future order. This is probably a good thing, since I have enough things to remember at this time of the year.
Posted by Ann at 11:48 AM