How I Spent My Christmas Vacation

Once our family festivities ended, I planned to stitch and blog.

I stitched. I also did some stash diving, looking for projects I want to work in the coming year. I even finished the things I stitched this week that needed finish-finishing. But . . . I found that I wasn't spending much time online--so blogging fell by the wayside.

So to catch up on that, this is what I did this week: 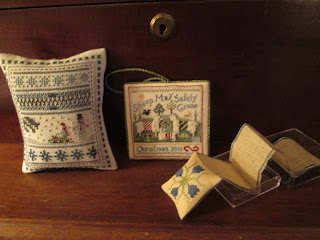 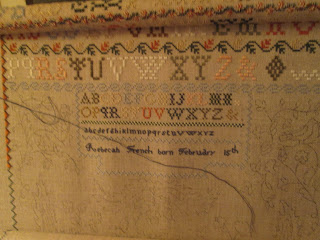 Rebekah French now has all of her alphabets complete and only one more line on the attribution. The last bit of the attribution could have been stitched last night, but I thought I'd have an aneurysm at worst, a hissy fit at least, if I had to work one more letter or number over one thread. So I stopped. That was probably wise. 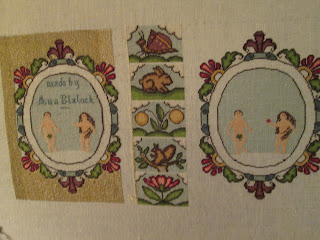 And, by golly, I got more background worked on Eve in the Garden. I am absolutely determined to work on this one evening a week until it's done. It may take all of 2017, but it's going to happen. I want to do some of the fun stuff, and I can't until I have the background worked.

And then there was the stash diving, where I decided on some projects I'd like to start for the New Year. But that is the topic for another day--like maybe tomorrow, if I can get my act together!
Posted by Ann at 2:44 PM