On the Road Again

Because life gets in the way, I had to leave Ellen's second class at lunch time yesterday. But, before I did, I got this much stitched. 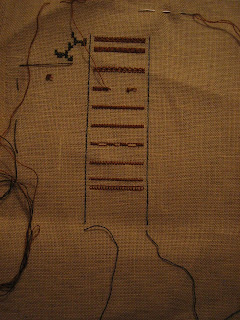 The needlebook which will fit into: 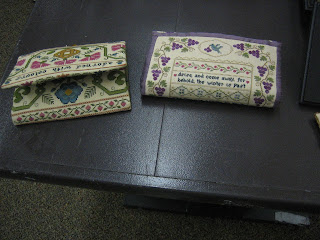 The huswif on the left (although I'd love to take the class for the one on the right, too).

Ellen teaches a small for just about every project. In the small, she covers any unusual stitches or techniques you may need for the main piece. It's very helpful, and not overwhelming, although I do have a good bit of spaghetti on this one that I will have to deal with before I can proceed.

Anyway, we hit the road at lunchtime and the less said about that trip, the better. I'm not sure what measurement Google uses to determine travel time--and they do say that road construction and other delays can affect the estimate--but seriously--OK, enough venting on that subject.

We decided to stop on the way home at the Museum of Appalachia. We visited this site on the way home from a wedding and said, at the time, we really would have to return. So we did. It only took thirty-six years for it to happen, but we returned.

The structures and artifacts were collected by a single individual over a lifetime, brought to the site, and set up as they might have been when first constructed. 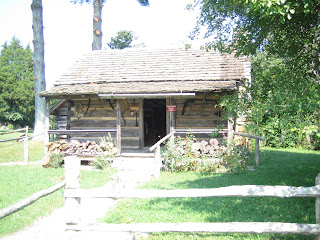 They are furnished, at least partially, as they would have been on the frontier. Keep in mind at the time they were built that Tennessee was the frontier. 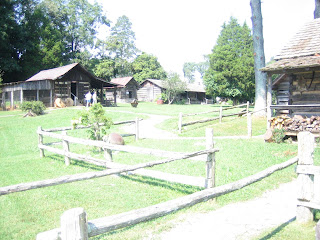 A grouping of buildings 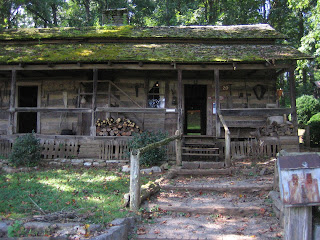 A frontier McMansion.
Can you imagine raising nine children in this house?  It had two rooms and a loft, which could be accessed from the front porch.

And on that note, we are going out to dinner.  And, quite frankly, after seeing how generations of women had to work to feed their families, three times a day, day after day, I feel just a wee bit guilty about it. Not guilty enough to go out and grind meal and slaughter a critter, but just enough to be thrilled to live in this day and age!