what happened to the week-end?

It seems like I walked in the door about five minutes ago on Friday--and now it's Sunday.

There was a little bit of stitching going on: 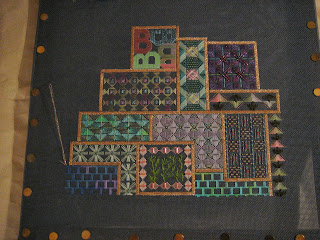 I have run out of the gold thread needed for the borders, but I contacted the teacher and she is sending more. Until it arrives, I probably won't get too much done on this design, simply because it's easier to work each new motif when you can stitch the borders for the preceding one. I did think about putting the beads on the lower sections--as my arms are short, I'm going to need to flip this to stitch the top motifs more comfortably anyway, so I would be less likely to catch the working threads on the beads.

But that would require working with the beads. If I have to mess around with beads, I'd rather deal with them all at once.

I do have a project to stitch for EGA and Morning Has Broken is just sitting here waiting, so it's not like I'm lacking anything to do. It's just been nice to stitch on something that doesn't require additional magnification.

Speaking of which, I am in the process of clearing out the two tottering stacks of magazines and books next to my chair so I'll have room to bring the Dazor back out. Since the cyborg eyes, I haven't needed it.  However, I need help working tent over one on 40 count on SL's The Huswif. And there is some concern that one of these days I could be buried in an avalanche of murder mysteries and other printed material.
Posted by Ann at 5:05 PM