An Even Lazier Day

Dearly Beloved and I have decided we're recuperating from going on vacation. Today has been an even lazier day, and basically a rerun of yesterday. I did cook breakfast this morning--even though it was served around 11:30.

I have also been stitching. This should not come as a surprise.

This is my latest entry in Nicola's Scarlet Letter Year stitch along. 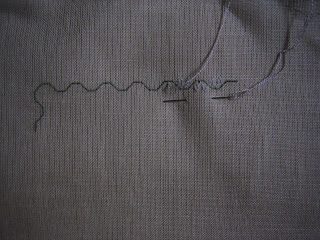 It's called the Huswif Panel.

It's worked in tent stitch.

I have decided this is going to be a strand-a-day project because that's about all I can handle. Even with the Ott Light and additional magnification, I was totally cross eyed after the first strand of green. I did persevere and start the little white honeysuckle blooms, then decided that that way lies madness.

After that, I wanted something a little easier to see, even with the cyborg eyes, so I picked up something on canvas. 18 count canvas, in fact. It feels like I'm using a tent pole for a needle and the holes in the canvas look like chasms after 40 count linen, but I am not complaining.

This is a Marnie Ritter piece called "In the Mood Blue."  It was a class that recently ended from Shining Needle.

I had started it the first week classes were posted a month or so ago, but was in the middle of Ann Scutt and wanted to get her finished. Then I somehow cracked one of the stretcher bars and it would no longer hold the canvas securely, which meant I needed to find another 15" stretcher bar.

So, after I decided today that I wanted to work on it again, I needed to locate another 15" stretcher bar.

I found nine of them.

None of them wanted to play nicely with the three I already had.

(And, yes, I realize that I do have enough stretcher bars in the stash to build a small log cabin. Or maybe even a large log cabin.)

You would think that stretcher bars would have some sort of common method of construction, but other than the length, not so much. Dearly Beloved managed to "persuade" the most compatible one to join with the others, but it may never let them go again once this project is finished.

Anyway, this is where I am at the moment: 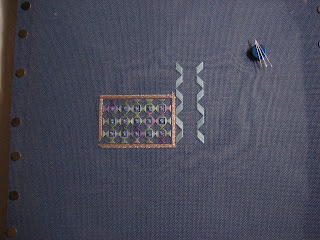 I think I'm going to try rotating several projects for awhile. I want to finish up the Schwalm pocket soon and I need to get the stitching for Buttons a' Bounty finished before the finishing kit comes. Then I'd like to take care of all the spaghetti from the two Ellen Chester classes I took last week-end. And then there are about forty dozen other projects sitting by the chair that all want to be stitched.

Did I say something about madness? It's an addiction.
Posted by Ann at 12:47 PM