Falling off the Face of the Earth

Which is what the last week feels a little like. . .

We went to the loveliest wedding I've attended in years. The bride was exquisite, the groom was dashing in his Navy whites, and Baby Girl was absolutely adorable in her peach chiffon maid of honor dress.

However, if you want to guarantee that it will rain, schedule a garden wedding. It poured. Buckets.

And, I am delighted to say, there were no bridezilla meltdowns.  The bride and groom obviously realize that it's not the wedding but the marriage that's important. The staff at the restaurant got everything moved inside from the enclosed patio where the ceremony was to have occurred.  They were efficient and professional and kept their collective sense of humor through the whole thing.

But none of my photos came out. Surprising, you say. This was not my fault! The flash on my camera has apparently died so none of the pictures I took in natural light (remember, pouring buckets of rain) came out.

Anyway, we had fun at the reception and fun with Baby Girl and not nearly enough sleep and came home and I broke. I wish I could say my head was spinning due to too much champagne, but somehow I missed getting any--anyway, once again, better living through chemistry and I'm over it.

To add to that, the office renovations are finally finished and I was able to move into what one of my coworkers keeps referring to as our final resting place.  We've had to move three times during the course of this renovation--we're the office nomads, dragging our bankers' boxes of files behind us. Finally, finally, I've been able to unpack my stuff and try to get it organized in a logical way. Hopefully I can remember the logic of that organization when I need to find something.

There has been a little stitching done this week despite the spinning head and the exhaustion from moving (again).  Quite frankly, I was glad to have 18 mesh canvas to work on.  This is where I am on In the Mood Blue: 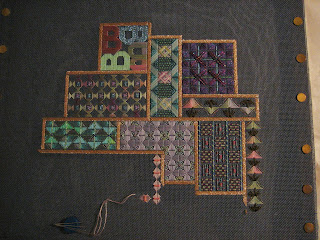 I'm getting very nervous about the amount of gold thread I have for the borders.  I still have a good bit to go and not much thread left in that color.  I've said it before and I'll say it again--I would really rather have thread and not need it than need it and not have it--and I'd rather just go ahead and pay for extra upfront rather than have to contact the teacher or designer for more. If I wasted thread or used away knots that were five miles away from the stitching, I could understand why I sometimes run out, but I'm really sparing when it comes to thread usage.

Anyway, I'm sticking to big canvas again until I have recovered from the past week and can focus my eyes again.
Posted by Ann at 4:18 PM