Mary Atwood and I have spent some quality time together this week-end.  Not as much as I would have liked, since life and responsibilities got in the way, but I feel as though I made some progress. 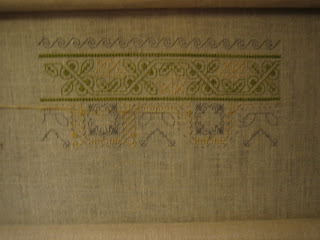 This is where I stopped late this afternoon.  We are going to spend another hour or two together before bed.

And, as usual when I stitch one of Joanne Harvey's reproductions, I feel like I am being spoiled and pampered by the quality of the instructions and the amount of information.  Depending on the part of the sampler, you may have more than one chart involved in the instructions.  And they're in big print. 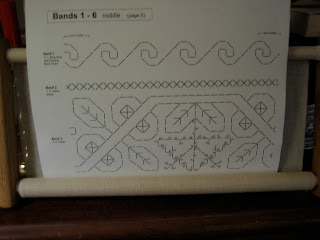 Just look at the size of this chart!!!  Even cyborg eyes can see this!

Normally, I like figuring out my own pathway when stitching double running. Although the studies are contradictory, I firmly believe that you can help stave off Alzheimer's by taking a daily brisk walk and using your brain in ways that will help chart new neural pathways.  Figuring out double running paths and working diagonal Montenegrin will either chart new neural pathways or  fry the ones you have--hmmm, forget that last one--anyway, I generally find trying to follow previously numbered paths confusing.  However, these charts are so nice and large the numbers don't get smooshed together, the pathways are logical, and despite the fact that I have several large sheets of paper floating around the wing chair at any given time, I'm finding that stitching this is very relaxing.

There was some discussion about the light cream silk.  A friend of mine is also stitching Mary and has decided to go with a darker gold.  When I first saw hers, I agreed with her decision.  But then I stitched a darker gold instead of the one kitted with the project on part of a band and the original shade on the other part.  Dearly Beloved and I gazed upon it.  We both decided we like the very light one much better and that it does look more like the original sampler.  So, I'm sticking with the original color.

So, back to stitching until it's time for bed. Monday mornings come way too soon.
Posted by Ann at 5:44 PM