I am done with pilots for awhile.  I have some lovely hearts added to my collection--and they will be shown on the blog after Gay Ann's February heart sale.  Actually, starting next week sometime, I will be showing one of them in progress--amazingly, I remembered to take pictures as I worked, so you can see how Periwinkle and Pearls heart happens.

While only one heart took significant stitching time (and only because it was solidly stitched), there were a lot of them, so I haven't stitched on anything except hearts for the month of January.  Well, except for my January 1 start.

This is it--REALLY bad picture, but then, until today, we've had more gray, gloomy days than otherwise.  (Seeing a ball of blazing gas in the sky this morning almost freaked me out until I realized it was that mythic creation, the sun.)

This is band one of Mary Atwood: 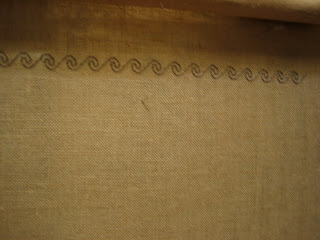 Poor Mary has been gazing reproachfully at me for weeks. I have promised her some significant stitching time this week-end.
While I've been in Pilot Paradise, a number of things have gone on in the world that I would have liked to have blogged about, but couldn't take time.  Now I am.
Betty Ring's Auction
In a word, WOW.
In the class I took from Joanne Harvey at Winterthur, she said she thought this auction was going to set the benchmark for sampler sales, and I do believe she is correct. To be tacky about money, the total surpassed the expected sum by over a million, and that is even more significant when you realize that about a quarter of the collection did not sell.
The pieces that didn't meet the reserve were mourning samplers, for the most part. When I looked at the catalog, I was struck by the number of mourning pieces in the collection. I'm not crazy about mourning pictures, even embroidered ones, but then, I'm a stitcher.  Betty Ring's interest was in the history of the girls who stitched and the schools and regions that produced specific styles.  The information on the mourning samplers would provide some of the information she sought about the person who created the sampler.  In that context, the focus of part of her collection makes more sense.
On a number of blogs, there have been comments that it is a shame that the collection was broken up and the pieces dispersed.  In reading the tributes in the back of the auction catalog, it becomes obvious that this was Mrs. Ring's intent, that she intended at some point, to auction the collection herself. Sadly, she has been unable to understand and appreciate the impact this auction has made, bringing, hopefully, a wider appreciation for this type of art.
From the sublime to the ridiculous:
paula deen
I am a proud Southern cook. Actually, I have said I never want to live in a place where I can't get good pimiento cheese (also known as Southern peanut butter or Southern pate, depending on how highfalutin' you get), Duke's mayonnaise, or White Lily flour (even though I understand it has been taken over by others).  However, most proud Southern cooks do not cook like Paula Deen.
On occasion, we do go over the top.  These times are called Thanksgiving, Christmas, family reunions, and, if you're lucky enough to belong to a small church, dinner on the grounds (generally late spring or early summer celebration, usually held outdoors after the main service).  Then, we do pull out all the stops.  So do people in every other part of the country for celebratory times. The rest of the time, we focus on as many fresh vegetables and fruits as we can get (luckily we have a looooooong growing season).
We do not eat fried chicken or pig at every meal. (Actually, a lot of us don't fry meat at any time because you end up with grease splattered all over everything and it's a pain to clean up after.)  What I remember from growing up,  are tables laden with what are generally called "sides."  We love our vegetables.  I have church cookbooks (the absolute best cookbooks to have in my opinion) that have pages and pages of really delicious salads and vegetable sides.
I will admit, I make biscuits.  My recipe uses canola oil and skim milk.  I have never had a can of shortening or lard in my house.  And while I am a large and lovely woman, it's more likely due to sitting and stitching for hours on end and a sad Pepsi addiction than to what I eat.
So I'm really ticked off that all Southern food has been maligned because of one person's health issues.
Rant over.
New rant
I travel occasionally for work and for pleasure.  I have found that many hotels are starting to use duvets instead of the traditional sheet, lightweight blanket, bedspread, (and extra blanket in the chest of drawers).  I can understand that it's more economical to launder the duvet covers than bedspreads and blankets. I can understand that the housekeepers can make up a bed much faster if it has a duvet than the usual configuration.
However, on my last few trips, I have found that I spend most of the night either throwing the duvet off (because I'm too hot) or pulling it up (because I'm too cold).  I have yet to find the happy medium.
Please do not tell me to change the thermostat in the room. I have come to the conclusion that they are there to simply make you think you have some control over the ambient air temp.  They do not actually have anything to do with the heating or air conditioning, or lack of either.
In the grand scheme of things, this is a minor annoyance. However, it is annoying. And what is a blog for, if not to reveal ones inner crankypants?
On that note, I'm going to put another load of laundry in, plop myself in the wing chair, and stick a needle into some linen.
Posted by Ann at 9:20 AM