I'm still working on pilots and obviously skipping around.

These are the threads for Pilot #5, which Gay Ann described as "pink." 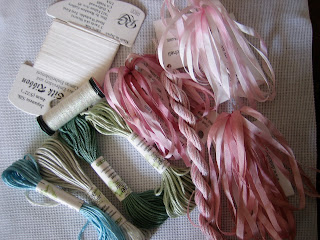 Because of some conversations in her classroom at Shining Needle, Gay Ann made some additions and one heart morphed into three.  And each is prettier than the one before.

There are also pearls that go with this series but I didn't want to take them out of their sealed package for the photo and run the risk of spilling them everywhere--which, given my usual level of klutziness, would have happened. Instead, I waited until I needed them and very carefully opened the package inside a tray with relatively high sides so they would be contained.

This proved to be a brilliant move on my part.  Don't ask.  It could have been ugly.

With Pilots 1, 2, and 5, 6, and 7 completed, I have five finishes already for the New Year.  And I can't show anyone (well, except Dearly Beloved because he lives here) until Valentine's.

Now I am going to go mount another piece of Congress cloth so I can start another pilot.

And, by the way, after stitching Pilot #2, I can tell why Gay Ann called it "rust."  Just goes to show you can never tell what something is going to look like by seeing the threads alone.
Posted by Ann at 3:26 PM