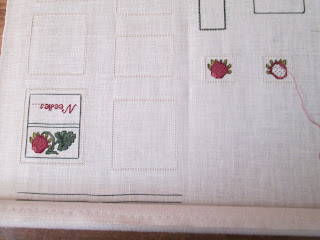 And after stitching these lovely strawberries, I hit the wall.

This has nothing to do with the project or the design. I love everything about it--well, maybe not the Nun stitch, but that's all finished. The problem is with me.

I can't decide if I have a short attention span or the worst case of Stitcher's ADD ever, but I can work on a project for only so long and then I have to move to something else, something fresh, something more exciting simply because it's new and different. I can't figure out why. I come from a long line of women who persevered with any project until it reached completion before even considering taking on something else.

Mother is a case in point. She made a lot of The Saint's and my clothes when were were in elementary school because she loved to sew. Not a single dress missed having a designer touch. She did buy fabric ahead; there was a fabric outlet store fairly close to my grandmother's house back in the days when there was a multitude of mills in our area. When the outlet received new shipments, the call would come and we would be loaded in the car for a trip to the store. There would be intense consultations--I remember having fabric held against my face to determine if it was the exact shade needed to bring out whatever they felt needed to be brought out--and my father used to joke that the back of the car was dragging on the ground from the weight of the fabric when we returned home.

Meanwhile, I truly will have to live to 385 to complete half of my stash, and there are a lot of unfinished treasures in it.

For those who have been reading my blog for awhile, you'll know I've attempted this before.

But I'm going to try again.

At least until the model I promised to stitch arrives--then it's definitely going to be a one-at-a-time process.