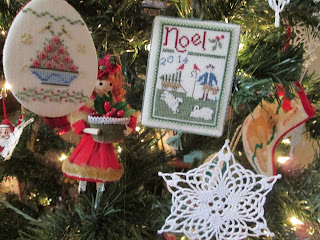 Usually I just post a photo on Christmas Day, but since this is like no other Christmas, and since I haven't been a very good blogger this year, I'm going to babble on.

For Christmas Eve, I gave myself the gift of stitching all day: 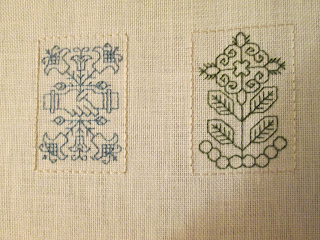 These two panels will be mounted back to back for the scissors fob for Emie's Etui's scissors fob. Notice they are double running. I have said it before, doing double running should be creating new neural pathways, but there are times when I think they actually destroy the ones I have.
And just when I thought I was through with double running, the first band on one of the major parts of the etui body itself starts with . . . yep, you guessed it . . . double running. 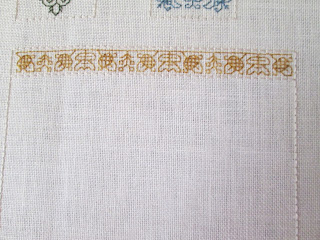 I stopped stitching for the day after this.
And now on to Wretched Excess.
Generally I take four or five classes a year, and I set aside a little slush fund to cover going hither and thither to take them. My last classes were in Williamsburg. In February.
And the last few years, Dearly Beloved has told me to buy what I want and put it under the tree since he is basically clueless.
There was a little more under the tree this year than usual. I went a little bonkers, thus the Wretched Excess business. When I saw the whole stack piled up, all I could do was shake my head and tell myself I now have to live to be 386. And I'm going to show them throughout the coming week instead of one big glob.
Wretched Excess, Day 1
The Crewel Work Company is doing a lot to revitalize crewel embroidery, which has a special place in my heart because it's what I started doing when I started stitching. And they had special sales this year.
There are a couple of designs I've found that require linen for a background, and they offered a discount and free shipping on their lovely linen twill. So I splurged and bought a great big hunk of it--and with it, they sent a gift, a redwork embroidery for a sweet bunny. They also included gold-plated crewel needles. 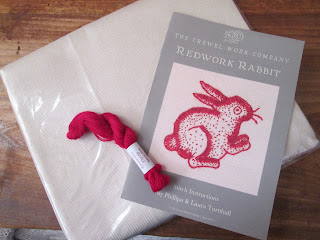 Isn't that adorable? And now I'm tempted to hoop it up and stitch all day today on this.
And that may make this an even happier Christmas.