Before you say anything, you're right. I have gone bugnutz crazy to think that I could finish twenty projects this year.

I was thinking of a new start on New Year's Day and was hoping that maybe I, Bathya might wander my way in time to do that. When the mail came yesterday without Bathya, I started rummaging in the stash to see if there was another sampler that reached out and grabbed me.

What reached out and grabbed me was the realization that I have at least half a dozen (maybe closer to a dozen, but I don't really want to admit that) samplers already started. And then there are all the smalls and etuis and workshop projects and assorted other things that I have stuck a needle in at some point before something else shiny came along and lured me down another rabbit hole.

And then I was scrolling through my Facebook feed and ran across Elizabeth Hurd's post about her 20 in 20 system. Elizabeth is a needlepointer who does some incredible stitching (she's started writing a column in Needlepoint Now, btw). Last year she and a friend were both feeling overwhelmed by all the projects that had been started, so they challenged themselves to finish 19 in 2019. The deal was that they could substitute other projects for the ones they originally pulled, there was no guilt or blame if they didn't make the goal, and new projects were welcome. They cheered each other on, and Elizabeth finished twelve of her projects despite the fact that she moved in the middle of the year.

I have decided to try it. I'm not making a list since the minute I put something on a list, I immediately lose interest in it. I'm just going to pull things out that I'd be happy to have done, and make a deliberate effort to pull things out of the finishing basket and get them finally finished. What's the use of stitching something if it's never assembled?

So, today I am working on the storage box for Cherry Berry, and this is where I am at the moment. 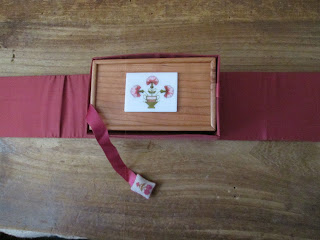 There are some accessory pieces that will be attached to the storage box and I'm going to start working on those.

I am not giving up on Zen Stitching, especially for evenings after work. And I can still start new projects. In fact, I have agreed to stitch a model that will be perfect for Zen stitching, and it should come my way in the next couple of months.

To be honest, I'm not sure how long this goal will survive, but I hope it will give me a more productive year stitching-wise than 2019 was. And hopefully I'll have something to blog about as well.

Keep your fingers crossed for me!
Posted by Ann at 12:08 PM