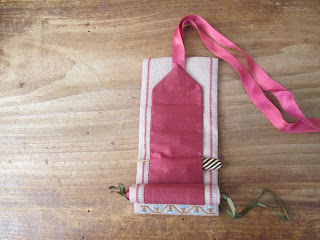 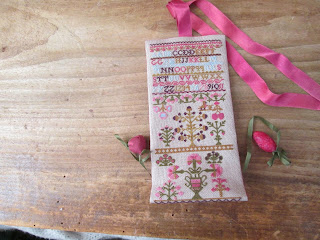 I have to admit that the strawberry and cherry that fit into the tube at the bottom of the etui were the hardest parts to do. That's a wee, tiny tube and I had to keep cutting the size of my berries down so they could fit. So I started with lovely, plump berries and ended up with somewhat skinnier versions.

And I have to admit that I cheated in creating the tube.

I had started putting this together months ago and could not get the tube insert to be round, which it needs to be. I used a variety of highly colorful words to encourage it, but to no avail. I finally put the whole thing in time-out until it decided to behave.

Apparently, the solution to this dilemma was percolating in the back of my head all this time.

What I did was cover the Mylar piece with silk--then I found a dowel that was the size I needed, wrapped the silk-covered Mylar around the dowel, and used rubber bands to hold it in place. Then I set it aside while I made the storage case.

Now, I have to say that this caused a great deal of discussion in the household. First of all, there was the trip to Home Depot to find a dowel of the right diameter. I think I discombobulated both the nice man who was helping me find the dowel and Dearly Beloved with my request. Then I explained to Dearly Beloved I needed rubber bands to hold the Mylar in place.

One thing you need to know about Dearly Beloved is that he has an antique cabinet which he has turned into storage for all sorts of bits and bobs. (I would love to turn it into storage for all sorts of embroidery bits and bobs, but I haven't been able to persuade him of the brilliance of this idea as yet.) So, when I asked for rubber bands, he rummaged through his cabinet and brought three different types for my deliberations. He also mentioned that he had several other types if any of those three didn't work.

Anyway, as I said, I wrapped the Mylar around the dowel and the rubber bands around the Mylar--and then let it sit. And this drove Dearly Beloved crazy because he wanted to see if it was working after about 15 minutes. I thought I was going to have to slap his hands a couple of times to keep him from taking it apart to see if the Mylar was going to hold its round shape.

I did sew the sides together while the Mylar was still wrapped around the dowel, so Dearly Beloved never did see if the Mylar would hold its shape on its own. But it worked and I got a round tube.

In the grand scheme of life, this is a very small triumph, but I'll take my triumphs wherever I can get them!