I planned to put Tsubaki's carrier together this past week-end. I did get all the pieces pressed and the Mylar cut out--and that's when Ode to Jane Austen started calling my name very loudly.

So, I finished the piece that goes on the inside of the top: 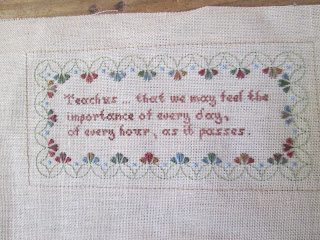 I really enjoyed doing the border--the stitch pattern for the leaf outline was easy to remember so all I had to do was count the number of units and zip along--didn't even have to refer to the chart after the first one!  And then those flowery things were fun to stitch, especially with the change in color from the overdyed threads.

I'm not going to say much about the letters . . . I may have mentioned a time or two--oh, who am I kidding!--I have mentioned at least on a monthly if not weekly basis on this here blog how much I do not enjoy stitching letters. I do not know why I don't like stitching them, but the fact remains that I don't. But I forged through and finished.

Then I looked at the other parts of the design. There is a section of the needle roll that is nothing but letters and numbers, all cross stitch over one.

Hmmmm--it just made sense to get the part I would least enjoy stitching over first. So that's what I started. 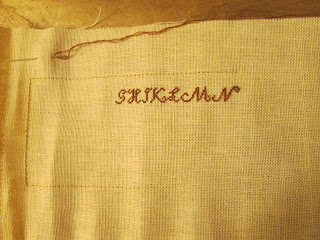 This is where I was when I realized I had misread my notes and had neglected to check my notes against the chart and I was cross-stitching all these complicated letters over one thread in the wrong color.

This is where I was for the nano-second that I considered removing all those teeny tiny little stitches that made up all those complicated letters.

This is where I was when I decided that perfection is over-rated (I know, this is me talking--maybe I'm getting wiser in my advanced age) and that no animals were harmed in the stitching of this project and I'm not getting graded and this error will not go on my permanent record.

This is where I was when I determined to view this as a learning experience and a reminder to never trust my notes completely especially when I'm stitching the project almost two years after I took the class. 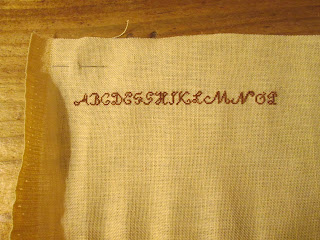 And this is where I was when I realized I had miscounted the border.

That had to come out.

It has to be accurate because it's part of the assembly process.

So that came out.

And, by golly, I will get this stitched before I let myself pick up another section to stitch.

Doing the finish-finishing on Tsubaki is looking more enticing all the time.
Posted by Ann at 3:33 PM