From the time I sewed the linen for Mary Otter to the scroll bars until I took the last stitch, it has been six months and two days.

And now she is complete: 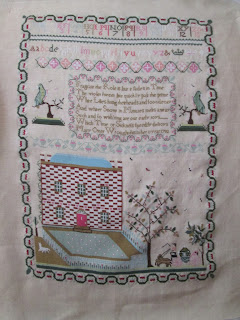 I have to admit. I have not been completely monogamous. I took off to Williamsburg twice for trysts with other projects. And, shameless hussy that I am,  I stitched Barbara Jackson's SNS Christmas ornament for 2017 and Tricia Nguyen's Jacobean Flower under the same roof as Mary Otter over my Christmas stay-cation.

Still, I have to admit that she took longer to stitch than I anticipated. There is a lot of over-one tent stitching, which adds to the level of delicacy and detail in the sampler. It has been worth it.

Most people who know me know that I tend to prefer 17th century band samplers. This is 19th century, which I dabble in but don't focus on. Let me introduce you to the little dude who started this whole thing. 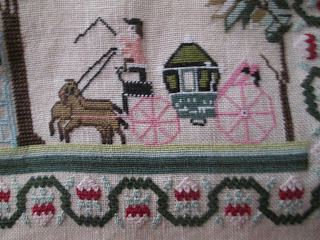 When I saw this character on the original sampler, he caused my big mouth to open and say to the sampler's owner, "If you chart this, I'll stitch the model for you."

And now I have.

And now I have to figure out what to do with Life after Mary Otter.
Posted by Ann at 8:50 AM