The first project in the rotation that I picked up was Gay Ann Rogers' Vintage Roses Heart, mainly because I wanted to work on something smaller than Mary Otter.

Here's where I was after 10 hours: 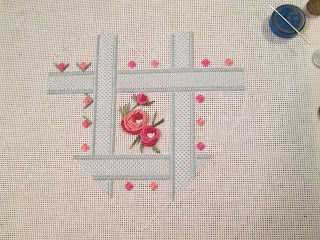 I took advantage of one of the loopholes in my rotation plan, and I finished the heart today! 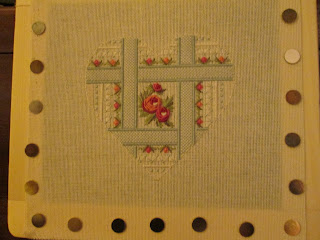 Pardon the quality of the photo--it's shot under less than optimal conditions.

There's a big difference in finishing something in half a week as opposed to half a year--so I'm glad I chose this project to start.

I have to admit, it's finished more quickly than I anticipated.  I've had more time to stitch than I normally do during a work week. I have been somewhat indisposed.

Yesterday was my annual physical. A particular vaccination was strongly recommended for someone of my age and with my medical history. I agreed it was probably a good idea. I had an allergic reaction to the vaccine. I broke out in hives. I have never had hives before. I do not wish to ever have hives again.

So yesterday, last night, and part of today, I have been taking heavy duty antihistamines. This means that I have spent some time in the wing chair, dozing, watching episodes of Law & Order: Criminal Intent, and stitching when I could focus my eyes.

Luckily, the needlework did not seem to suffer. At least, I don't think it has.  Maybe I should look at the piece again tomorrow when, hopefully, I will be undrugged and clear-eyed.
Posted by Ann at 5:13 PM