I finally had time to thread a needle this afternoon!

Thursday evening after work I had to be an adult and balance the checkbook and pay bills.

Friday evening after work I had to corral the dust hippos that have been cavorting on every surface and push the vacuum cleaner around and throw several loads of laundry into washer and dryer.

Saturday we spent the day traveling to and from Mother's retirement center and visiting with her in between. Actually, we spent more time visiting with The Saint; Mother spent most of the time dozing in her chair. Dearly Beloved also spent most of the visit dozing in his chair. The thermostat in Mother's room is kept at the "hot summer day" setting, so it's no wonder we were all a little groggy.

Today I finally had a chance to sit down and work on the Gentlemen's Nightcap. 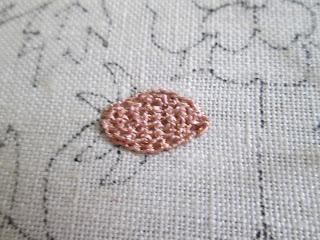 This is one of several strawberries on one of the panels I had not worked on earlier.

It took a while to get to this point.

When I set up my rotation list, I basically made sure I had the linen or canvas, the threads, and the instructions together.

I didn't think about the other stuff.

I thought there was a Japanese needle with the kit. There may have been at one point, but it's not in the needle pad and I attacked that with a magnet in case the needle was hibernating deep within. So I had to get another one from my carefully hoarded stash.

I decided that it would be a very good idea to somehow organize the threads in a more easily accessible way than the plastic bags they were living in. This meant digging in the stash for one of the empty floss organizer boxes that were living there. That was easy--I knew exactly where they were. But I got distracted because . . . well . . . stash . . . and I had to play in it a little. And then I had to organize the threads.

And then, because I'm using Gilt Silk Twist and it has a metal component, I needed my metal cutting scissors, which were not in the workbasket by my chair. This resulted in a few moments of panic, since I love those scissors. And then I remembered I had put them in the tool box I have for my goldwork. And then I had to remember where I had stored that--it could have been with a project or it could have been in the tote bag I took to Williamsburg.  So I had to go back to the stash room where I got distracted again because . . . well . . . stash and I had to play in it some more. Anyway, I found the toolbox and scissors and brought them back downstairs.

And then I finally got to stitch strawberries.

So . . . do I  count the time getting ready to stitch as part of the rotation time on the project? Or do I plan to spend more time on this project in advance, since it apparently takes me awhile to get set up to stitch?

Maybe I'm going to be a serial monogamist where projects are concerned.

If this is the hardest I have to think about anything today, I'm doing well.
Posted by Ann at 1:49 PM