I will be the first to admit that I am a total history nerd, and when you add needlework to that, I'm a goner. A complete and total goner.

And the first day of Winterthur just fed into that.

First of all, Winterthur has installed a new projection system in their auditorium since the last time they held a textile symposium. This was like having Technicolor after nothing but black and white--I felt like Dorothy in Oz. (Have I totally dated myself with that reference?) Every photograph that appeared on the screen was so clear and so detailed you felt that you could reach out and touch the textile you saw.

Tricia Nguyen, our Sensei of the Cabinet of Curiosities classes, was the lead speaker. Not only did she offer phenomenal photographs of embroideries and caskets from the 17th century, she has determined a matrix that indicates if a project was primarily worked by professional embroiderers or if they were done by girls and women who had the wherewithal to afford multiple colors and threads for the embroidery. She also talked about the number of women who worked in embroidery but who have flown under the radar because they were part of a greater economic whole, whether working for a professional (read "male") embroiderer or as part of a family unit.

I also enjoyed the talk from Andrea Pappas, who dissected the motifs found in the Fishing Lady embroideries popular in New England in the mid-1700's. I will never look at a sheep, or a strawberry, on a sampler in quite the same way again. I wish she had had time to go into the other design elements--alas, the amount of time for her lecture was limited--I think there may be a book in the offing--at least I hope there will be.

Our third speaker, Amanda Isaac, reported on Ann Flower's sketchbook. Ann Flower was an artist in Philadelphia in the 1700's. Underlying the description of her work, which was expressed primarily in her sketchbook and her embroideries, was the message that, had she been male, she quite possibly would have received the same kind of support for her artistic endeavors as a West or Copley. I look forward to taking a class from Joanne Harvey tomorrow that bases its design on the bouquet that adorned the cover of her prayerbook, simply to honor her contributions.

We also had a talk by Susan Schoelwer about silk embroidery. Many of the pieces she described were stitched after Washington's death and were a way of honoring him.

Then we had a delightful lunch, then too few minutes for some speedy shopping (hope to make up for that tomorrow), then we split up for our afternoon activities. 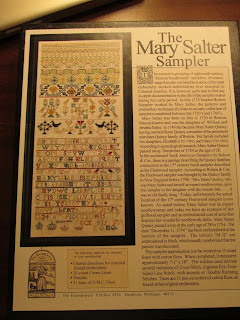 This is the newest addition to my Joanne Harvey collection. The next sampler from her I was planning to stitch was Ann Almy, but Mary may push her out of the way. As always, Jo had a collection of pictures of samplers and embroideries that cannot be surpassed. This group was all related to Boston embroiderers, and clearly illustrated the design elements that unite them.

As much as all this entertains me, the best part of going to an event like this is the chance to see friends. Some of them I see at guild meetings at home, but others I only see at events like this. And, let's face it, everyone has such a busy life, even if you're in the same locale, you don't get to spend a lot of quality time together unless you're involved in the same activity at the same time. The textile symposium at Winterthur is one of those magical places that fosters that opportunity for friendships to blossom.
Posted by Ann at 6:24 PM