But a finish nonetheless: 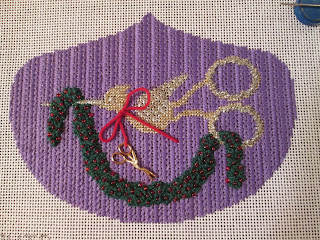 Yesterday I decided just to go ahead and finish the background since I was sooooooo close.

And then, after Dearly Beloved mentioned, yet again, that the garland looked like the bird had a fuzzy green worm in its mouth, I decided to add the beads.

Of course, now he says that it looks like a fuzzy green worm with measles.

I am ignoring him.

And with the background and the beads completed, it just made sense to add the box and the second "scissors." And with that, there was a finish!

I have to admit, I'm feeling a little scattered at the moment, trying to decide what I want to work on tonight--or tomorrow--or for the next little bit. There are still a lot of scroll bars to empty and there are still some projects that have suitably aged in the stash and there are some new projects arriving as we speak. I just can't decide which one to start on, or how to organize a rotation of sorts (although we know how poorly I handle rotations), or if I want to give up needlework and start baking bread or training for Ironman.

At the same time, I'm also trying to decide if I want to blog every day in November. When blogs were bigger than they are now, it was a tradition to do this. It doesn't seem to be happening very much any more, but since I am stubborn and tend to enjoy the customs and traditions of the past, I feel as though I should try.

But if that's going to happen, I need to get un-scattered.
Posted by Ann at 6:06 PM