A blink and it's all over

This is going to be both word-heavy and picture-heavy. Consider yourself warned!

I have to be very honest. After yesterday's lecturers, I didn't think today could match them. I was so very, very wrong--they were outstanding, as well.

Paris Spies-Gan started us off with a discussion of Mary Knowles and Mary Linwood, who were famous in the 1700's and early 1800's for their needlepainting. Mary Knowles came to eminence with the stitched portrait of George III. Later, Mary Linwood was famed for her reproductions of famous works of arts. Mary Linwood opened a gallery of her works which was considered a must-see at the time.

Dr. Brenda King discussed the contributions of the the Wardles, husband and wife, eminent in the field of dyeing textiles and creating embroideries. They also had 14 children . . . some of whom followed them into their life's work. Mrs. Wardle decided that England deserved to have its own Bayeaux Tapestry and led a group of women in the reproduction of the original. The same group of embroiderers also provided many works for the churches of their region as well as other commissioned work.  Interesting that the women's names are known--the men who dyed the threads they used (other than Mr. Wardle's) are completely anonymous. Dr. King's wry, dry wit enlivened her commentary--could have listened to her all day.

Ann Mason followed her with a discussion of the contributions made by May Morris, daughter of William Morris. I couldn't help but think as I was listening to the lecture--who was actually the more talented--father or daughter?  I think a good case could be made for May as the true creative power, especially in textile design and execution. I knew May existed and worked for Morris & Co--had no idea of the breadth of her interests and talents.

Amelia Peck talked about Candace Wheeler, founder of the Women's Exchange and the first female interior designer. Wheeler felt that women's economic equality was important--with that, other forms of equality would occur of themselves.

And finally we had Cynthia Fowler, whose talk on Georgiana Brown Harbeson brought the discussion of embroidery as art, not craft (with all those connotations of being a lesser form of expression) to a close. Harbeson's own works, as well as those of the women she felt were leaders  in the art field through embroidered expression, clearly show that art made by thread and needle can and should be appreciated as one of the fine arts.

After lunch, we split up for our afternoon activities. I took classes again.

First was another class with Joanne Harvey: 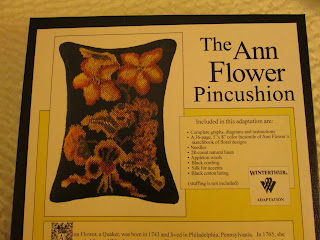 This is worked in Florentine (bargello, brick, Irish, whatever-you-want-to-call-this-upright-stitch) and the background is also completely stitched. And it's done with wool on linen.

Jo had more slides of this type of embroidery on everything from table toppers to pocketbooks to pockets to chair covers.  And we got to see some examples from Winterthur's collection. 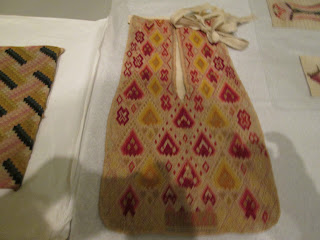 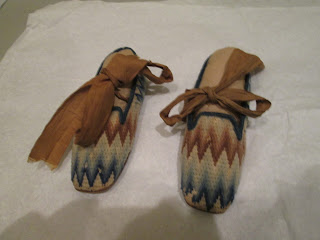 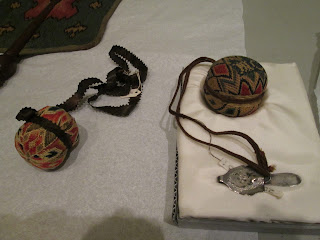 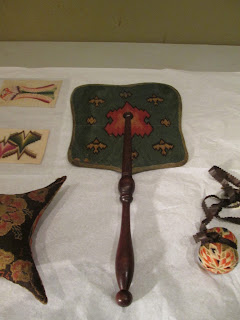 Then on to a class reproducing one of the pinballs in Winterthur's collection, taught by Margriet Hogue. 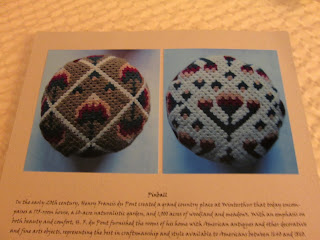 In class, we started making the "innards" and were warned that Margriet expects to see them completed at the next symposium, already scheduled for 2018.

And then it was over.

However, along with the three class pieces I took, I did a bit of shopping. I am taking home the kits for three of the other classes that were offered: 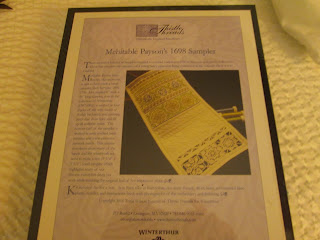 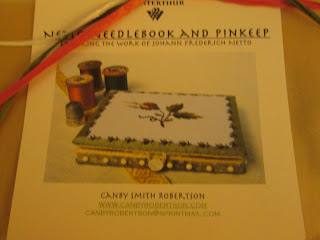 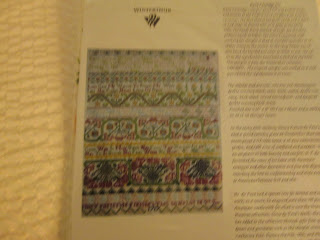 To tell you the truth, I am hoping for a long, cold, snowy winter so I can justify staying in and stitching!