I've been puttering around the last few days, trying to decide what I want to work on next.

So, I put a few strands into the background of Eve in the Garden. 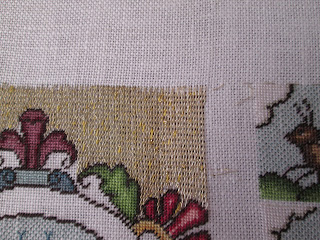 What I had already stitched has already tarnished, so it's very easy to see what I added. I'm not worried about the differences in shading. I had done the other areas at different times, and they have all turned the same shade, so I don't think there will be a great difference when this is finally completed.

In puttering around, I found the kit for this year's Catherine Theron project for guilds. 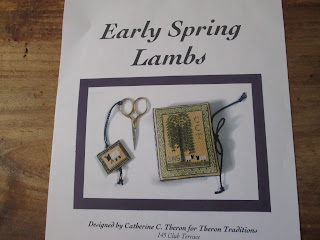 This may go on scroll bars today.

And then, night before last, I decided to put a few stitches into the background of this ornament, which has been sitting on the stand since the first of the year: 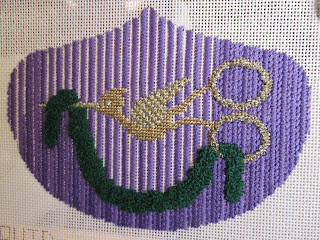 So, I moved that stand in front of the wing chair and started filling in the background. This is the second of David McCaskill's 12 Days of a Stitcher's Christmas. You may remember I had fantasies of doing the whole set this year. Those fantasies were first derailed by prework for workshops and then I decided to work on samplers and have actually finished three of them this year.

That is nothing short of amazing.

However, speaking of samplers . . .

I came home from my EGA meeting Wednesday night all fired up to stitch, which is usually what happens when I go to any guild meeting. I had some time before I needed to go to bed, so I pulled Rebekah French out and worked on the next letter in the eyelet alphabet.

And I had miscounted the number of threads between letters.

So I had to pull out what I had done--and since I tend to pull eyelets tightly, try to smooth the displaced linen threads back into place.

I believe Rebekah is going to wait awhile longer to be completed.