Somehow that seems appropriate, since we woke up to temps in the 20's this morning. That's a bit nippy for the Carolinas.

Anyway, Barbara Jackson's 2015 ornament through SNS is stitched--notice I said "stitched" but not "finished." 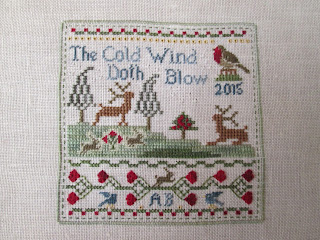 I love the worlds that Barbara creates so I rummaged around in the stash and found an ornament from Haus Tirol that came out last year. I started it last night. 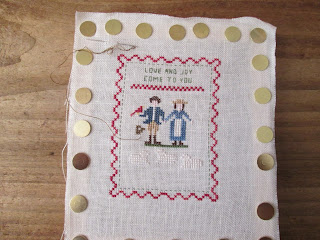 I have two more ornaments in last year's series, and I am getting into a "deck the halls" mood, so I may just keep on working on them for awhile. Then the plan would be to set up an assembly line and get them all finished in time for this year's tree.  Right now, I seem to be in a mosey-along-and-stitch-on-whatever-strikes-my-fancy mood, and these ornaments definitely strike my fancy.

Like everyone else, I am shocked and horrified by the string of terrorist attacks throughout the world, with Paris first on my mind. We can't forget the loss of life from the bomb on the Russian airliner and the attack in Beirut, either. I cannot fathom the depth of hatred that could precipitate these abominations. I pray that a way to change the minds and hearts of those who plan and carry them out can be found.
Posted by Ann at 8:56 AM