I wish I could say I flew to Paris or London, but instead I was home, doing a bit of housecleaning and cooking. I did catch up on my blog reading, and I did a bit of stitching.

I started something new: 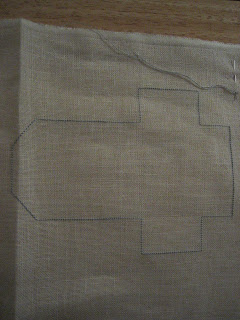 For some reason, this is showing up sideways. Anyway, it's the framework for Jackie du Plessis' Pocket for Posies needle case.

And I spent a lot of the day gluing. I started the finishing for the canvaswork ornaments I stitched in November. The kits came with the backing fabric and forms to mount the ornaments and cording. So, first you mount the backing to its form, then you mount the stitched piece to its form, then you glue the two forms together and sew the cording around. I would go and glue things for awhile, then I would wait so the glue would set up, then I would go back and glue something else, and wait for that to set up, then I had to take everything off the kitchen table so we could have dinner.

It didn't help to discover once I got the needlework glued and the backing fabric glued to find that the stitched side came out just slightly larger than the fabric backed part, partly due to the difference in thickness of fabric as opposed to stitched canvas, and partly because the design area was slightly larger than the forms. The kits did supply a heavy cording, and I think that's going to cover a multitude of sins. Of course, I always believe that cording will cover a multitude of sins. Usually it does.

Since dinner, I've managed to sew the cording to one ornament, so I do have one finish-finished project for 2014. 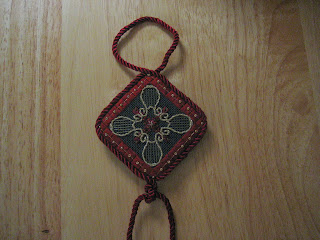 I wonder if I can count this as one of my dozen ornaments in the Great Triple Dog Dare ornament challenge . . .
Posted by Ann at 5:58 PM