On a gloomy January day

There was a list of things I had thought about doing today. They were even written down.  It all changed when I finally dragged myself out of bed to see that it was another gray, gloomy, yucky day.

The weather forecaster had said we should have sunshine today. He was wrong. We should have, but we didn't.

I had planned to work on Hannah Thornbush. It is much easier to stitch on 45 count linen in daylight, preferably bright sunshine. When it appeared that bright sunshine--indeed, even weak and barely there sunshine--wasn't going to happen today, I left Hannah in her pillowcase and pulled out Ann Lawle instead. 35 count linen can be seen in lamplight, at least as much lamplight as I turn on.

My mother-in-law, who was an interior designer, always complained about the amount of light we use in our living room. She said we could land a 747. She said the light from our windows could be seen from outer space. She said a lot of things which we ignored. Dearly Beloved and I are both readers and I stitch, and we need illumination.

Anyway, I stitched the framework for this band and have started filling it in: 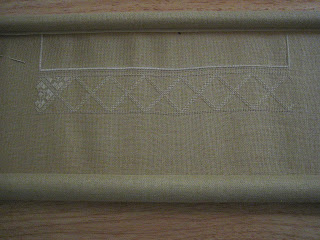 I am going to let this sit overnight and look at it again in the morning.  I tried the satin with two strands and it seemed bulky, so bulky that it was distorting the linen.

But one strand seems a little skimpy: 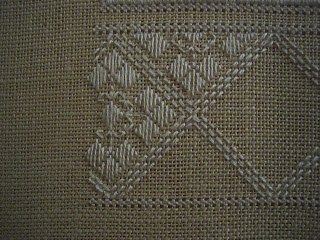 A close-up photo makes it look even skimpier. I think I need to set it across the room and look at it from a distance in the morning. After all, no one is ever going to look at it as closely as I am, especially with magnification.