I'm a wee bit stressed out at the moment.

Months ago, I signed up for a workshop with Betsy Morgan, which is scheduled for Friday and Saturday.

Then, the Big Kid announced that he would like to bring the family for a visit this same week-end so he could compete in an archery contest at the Renaissance Faire. This is not a problem, since he will, of course, bring The Flash with him. They wouldn't arrive until late Friday afternoon and would be attending the Ren Faire all day Saturday, so I could go to my workshop guilt-free, mostly.

And then we were discussing the holidays, and, as usual, everyone except me has to work either on them or the day after them. It occurred to me that we could have an early Thanksgiving and have The Saint bring Mother up and we'd feast on Sunday, so we could finally have all four generations in the same place at the same time.

This was all before I had to deal with having water damage repaired and mold and mildew preventers showing up and half the living room uninhabitable, at least at the moment. It also occurred to me that The Flash is most definitely going to bring his crossbow that shoots marshmallows and his giant plush shark (which, admittedly, we bought for him). He will most definitely be warned by his parents not to discharge the crossbow or swing the shark in the house. He will most definitely "accidentally" do one or both of those things because he is a five-year-old boy and these things happen.  Therefore, I most definitely need to do a whole lot more kidproofing than I started out to do.

At the same time, Dearly Beloved came down with a cold/viral/sinus thing. He is much better but I have been mainlining orange juice to avoid getting it.

And I have to go to work every day.

Normally I stitch for stress relief but this is all I've been able to accomplish this week on In the Mood. 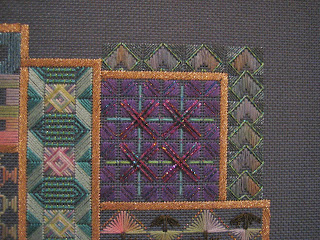 Just that wee corner that wraps around the square. That's it, and it wasn't entirely without stress. It's another section where the chart and the stitched model don't quite match, so I had to make some decisions and do some reverse stitching to make the motifs fit the space.

And it just occurred to me that Friday is November 1 and there is blogging to be done every day in November.

I think I'm going to bed. After some more orange juice, of course.
Posted by Ann at 5:24 PM