Back to linen again

While I'm waiting for the correct shade of gold thread to arrive so I can finish In the Mood, I've gone back to linen. 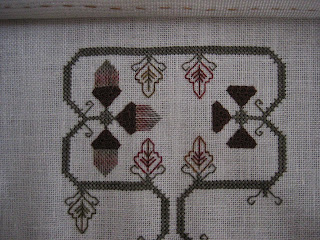 Since the finishing portion of Jackie du Plessis' Buttons a'Bounty class will start soon, it occurred to me that perhaps I should get the stitching portion of the class completed.

Originally I had planned to stitch all the framework in green first, then go back and fill in leaves and acorns, but the colors in the overdyed threads looked so luscious, I decided to stitch a strand of each in to see how they look on the linen.

I'm not usually a brown/green/gold/rust kind of person. I tend to go for pastels and soft tones. But I may be changing my mind, at least as far as this design goes.

I did run into one problem on the acorn body, which you can see if you look at the top and middle acorns on the left. While working the pattern on the bottoms of those acorns, I ran into very thick threads in the linen. VERY thick threads.

On the top one, I went back with a sharp needle and a strand of thread and simply worked a backstitch through the thread, which resulted in a slightly different, darker line down the acorn. On the other, I haven't done anything yet.  I'm thinking the slightly darker line looks better than the thick white line, but I'm open to suggestions or opinions.

Anyway, I'm going to stitch on this today and see if I can feel "fall-ish."  It's hard when the temps are running close to ninety here.

Then again, I could be in the upper Midwest, where fall decided not to hang around and the weather went directly to January and blizzards.

I think I'll enjoy the heat. Maybe not the humidity, but at least it's not frozen.
Posted by Ann at 8:39 AM