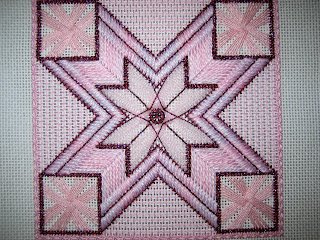 The first finish from my current group!!!

This was a project offered by Shining Needle Society and was a class offered by Carole Lake and Michael Boren.  A portion of each class fee went to one of several charities.  This, obviously, had funds sent for breast cancer research.

This was a fast and fun stitch.  Carole Lake is one of my very favorite people on the planet, and her classes are always the most fun--even online when you can't see her expressions or hear her tone of voice!  Adding Michael to the mix was brilliant.

You really can't tell from my washed out picture, but due to the structure of the stitches, the center is dimensional.  I realized just how dimensional when Dearly Beloved, instead of looking straight on, was holding the stretcher bars sideways and tilting the frame hither and thither at eye level.  He was fascinated. Considering how much I embroider, it's difficult to fascinate him any longer.

I did make a couple of changes--I did switch the Rose Blush canvas for plain white.  My piece of Rose Blush had a slightly corally-pink tone.  My skein of Watercolours was on the bluish side.  When I stitched the Watercolours on the canvas, the canvas went orangey.  I set it across the room for a couple of days and looked at it in various lights and decided I really didn't want the orangey tone, so I swapped out the canvas.

And having stitched for the first time with Sparkle Braid, I was so totally in love with it, I used it for the tie-downs on the stitches on the outer border rather than the darker Kreinik braid that's used in the rest of the piece. The border is more subdued than the original, but I don't think it hurts.

There may be a lag in returning to the rest of my group projects.  I am working on some pilot pieces for Gay Ann Rogers and (phooey!) I can't talk about them until she holds her eWeek sale in October sometime.  I do have some other things to babble about until I finish the pilots and go back to my own stuff, but there may be some really random posts until then.