Time Out and Time In

I thought I was going to get the Hedebo trim on the bottle holder done night before last.

It wasn't working out as well as I had hoped, but I thought it was going to be OK--until I looked at it in the light of day. Nope, not gonna work, looked horrible--so out it came.

FYI, it is much slower taking teeny knotted stitches out than it is to put them in. So that went into time out until I can practice some more--or find a different diagram from the one I was attempting to use.

But, I still wanted to stitch so I rummaged in the Pile O' Projects downstairs and pulled Rebecah French out of her pillowcase.

She went into time-out when the black silk I was using for the outlining was shredding--and when I say shredding, I mean it was pulling apart when I tried to take a single strand from the bundle. One of the things I learned from working for years with textiles is that black dye is probably one of the harshest, and darker colors can require heavier dye applications to saturate the fibers of the product. Occasionally, as a result, this problem arises. And I knew I had to have more black silk somewhere in the stash left over from another project; it was just a matter of finding it.

Obviously, I found it, and started on the last big flower: 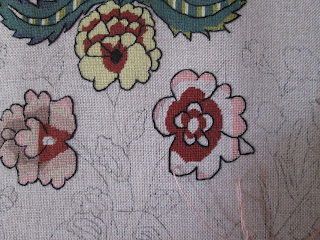 I was stitching along, thinking what blobby flowers these were, when it dawned on me that this sampler was stitching by a nine-year-old. I'm not sure I would have drawn better flowers at nine, much less stitched them.

I will admit, though, that I will be very happy to finish the tent stitch on this flower and move on to something a little more entertaining--and a whole lot faster--to stitch.