I just heard that we've lost one of the giants in needlework. Jane Zimmerman died earlier this week.

She was an incredible designer and stitcher. Her work was meticulous, not only in execution but in the research behind every stitch. She retired from active teaching over ten years ago, but maintained a phenomenal website for several years afterward.

I was honored to stitch some of her models for her last few teaching engagements, but my first encounter with her was my first class at an EGA National Seminar. I walked into class knowing nothing about her or her reputation. I just liked the class project; it appealed to my love of historic needlework and looked challenging. And I'm always drawn to history and challenges.

The classroom was small, we were crammed in tighter than sardines, and apparently it was near one of the hotel's prep kitchens because it was not only overly warm but also steamy (and one afternoon, I swear they were cooking cabbage all day--it was not only steamy but also stinky).

Jane wasn't fazed by any of it. She held court despite the conditions--if there is such a thing as reincarnation, I think Elizabeth I was back. She led us through the challenges of the design, cracked jokes, told stories. She was magnificent!

And here's the piece: 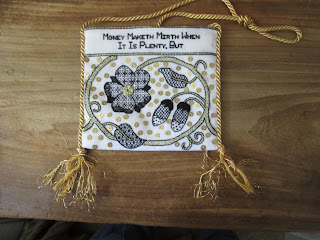 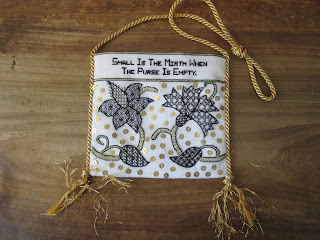 There will never be another one like her, and I miss knowing she's in the world.