Today I finished the other two pieces for the Golden Accessories set of smalls: 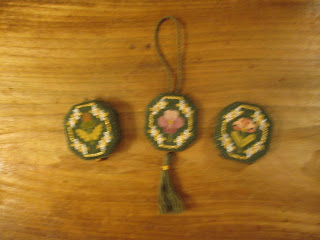 The scissors fob behaved itself and was no problem at all.  The pin keep on the right, though . . . this was the wild child.
You can't see it, but the sides are supposed to be ruched silk. They are actually sort of ruched silk. Ruching is not hard to do--you just stitch gathering stitches along the sides of a strip of silk, pull on them to gather the silk into lovely pleats, and sew them to the edges of whatever you need to sew them too.
This works beautifully unless the silk you're using frays like crazy, including while it's sitting by itself on the work surface without the touch of human hand--or any other hand, for that matter.
I've only had one other cut of silk dupioni that raveled like this, and I swore if I ever ran into another, I'd use iron-on interfacing before I did anything else. However, the pieces I cut for the backing for each of the pieces didn't misbehave, just the long strip
So, I said, I'll cut another strip--I had enough to do that--and interface it. I have a supply of featherweight interfacing to use, so easy enough to cut a piece, iron it on, and go from there.
Except . . .
Even though it was featherweight, it was just enough to keep the gathers from gathering--so back to the fraying and raveling piece. That sucker is sewn to the top and to the bottom, but those gathers are not evenly spaced and there are a couple of spots that got Fray Block applied. However, it is put together, and since it's just going to sit on display rather than being used, that's fine.
Now if I could just find the pins with the gold tops to stick into it, sort of like a voodoo doll, I'd be happy. I know they're somewhere in the stash, it's just a matter of digging in the right place.
In other news, I stitched the stems of the plants and leaves on this band for Hannah Thornbush. 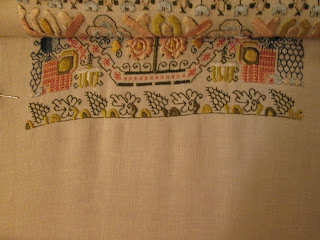 And I worked those weird undulating humps between each motif. I have no idea what they're supposed to be. Maybe Nessie is swimming along this band . . .