Adding to the library

A few weeks ago, we had a domestic disaster.

Now granted, it was one of those cheap fake wood bookcases that we had bought as a stop gap since Dearly Beloved was going to build a bookcase to match the bookcase he had built about twenty years ago.  Somehow he never got around to it, and we kept buying books, and finally one of the shelves gave up. And it took the three shelves below it with it. We heard thumping and bumping in the middle of the night but couldn't tell where it came from, so we both rolled over and went back to sleep. The next morning, I discovered an avalanche of books.

So . . . I figured we should go through the books to see if there was anything we would never want to read again and we sorted things out and took a couple of boxes to the library and a couple more to the Senior Center and stacked up the books we wanted to keep, which was now a greatly reduced pile.

And since we were going to have more room on the bookshelves (when Dearly Beloved finally gets around to building the new bookcase--I'm not holding my breath--I've been looking at Ikea and Amazon for another stop gap measure), I bought more books. 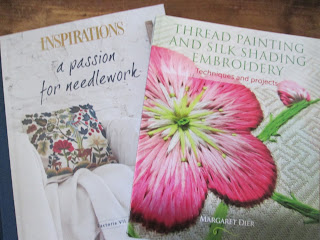 There is a lot of eye candy in these volumes, which I plan to enjoy as soon as I hit Publish.
Posted by Ann at 2:15 PM