Somebody asked me earlier in the week what I was working on, and I replied that apparently I'm not stitching at all in 2019.

For a variety of dreary reasons, I did not thread a needle from last Saturday afternoon until last night. Since needlework is my major source of stress relief, I was getting stressed. Believe me, I was getting  very stressed. And testy. And cranky, And unpleasant to be around.

On the way home from work yesterday, I decided that I was going to stitch last night if I didn't do a single other thing.

The spot sampler was a little more challenging than I wanted to tackle after the week that was, but Tsubaki was sitting right there next to my chair, so I picked that up.

And I finished the stitching for the pin cushion: 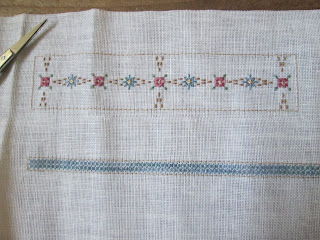 That last bit was put in this afternoon, in between loads of laundry. So, I thought, I'll work on the scissors fob since it has a lot of the same stitches.

And that's when I had a lovely, wonderful, blissful surprise! 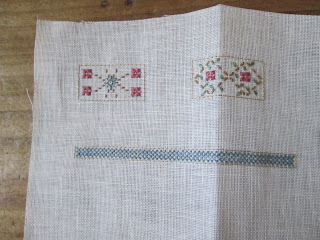 Either I stitched it all in class a couple of years ago when I actually was sitting in class, or I got it done immediately after and forgot about it.

And the potential answer to that question may explain why I've found a couple of things in my stash that apparently I liked so much that I bought them twice.