It was an absolutely wonderful week-end!

Our hostess and the planner of the event is delightful and was so very warm and welcoming to this newbie. I discovered I've taken classes with others who were taking this one, and met the infamous Cathy of Needle and Thread--we've followed each other's blogs for years. What a pleasure to meet her in person,  and, for the icing on the cake, she brought some pieces from her collection of Hungarian embroidery. I've admired them on her blog, but to see those exquisite pieces in person was more than I could have hoped.

And of course, there was the class itself. Jackie did a stellar job of explaining some complicated assembly directions and went over every step of the process.  I am always in awe of the way she plans and executes her designs and this was no exception. Ode has definitely moved into the current project basket.

I even got a little of the design stitched after class on Sunday: 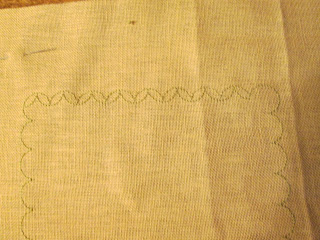 I also stitched a bit on my travel project on the way to Indianapolis: 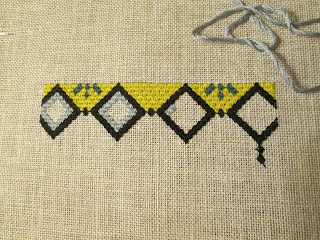 But then it was time to come home. We divided the trip in half on the way up, but had decided to take a different route home and do it in a day.

We traveled from 5:46 when we pulled out of the driveway of the hotel until 5:36 yesterday afternoon when we parked at home. We were not driving all day--we took frequent breaks and had a leisurely lunch (a little more leisurely than intended since the waitress apparently forgot to put our order in)--but it was a long, long day.

I took today off for laundry and recuperation. It is quite possible that I should take tomorrow off, too, but I plan to go to work anyway.  And I have stitched a bit today.

Am I working on Ode?  Surprisingly, not today. I want to press the linen for this first piece and mount it on either scroll or stretcher bars before I start to work on the insides. And that would mean finding the right size scroll or stretcher bars and that would mean another archaeological dig in the stash room. I decided that was too much like work after a day mostly spent in a car.

So Frances Burrell came out to play. 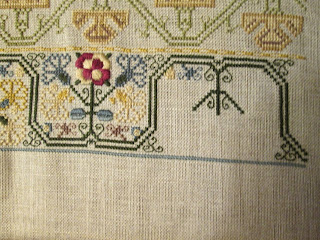 There actually was more ripping than stitching. I discovered that I couldn't count to 15 on the last "chamber" so I had to redo it. I think I have it fixed--I've only counted it about forty-leven times to be sure--so now I can add the pretty posies and move on.

To the next band, which is now shorter than it should be.