Day Four: The Mystery of the Locked Door*

The story behind the title can be found at the end of the blog . . .

Alas, all good things must come to an end, and so we had to travel home again.

There was still needlework to do. I brought my travel piece with me for the evenings of stitching in the lobby after class and to work on at Baby Girl's. And progress was made on the trip. 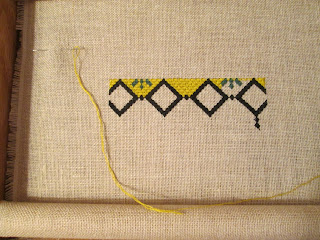 I'm working on Joanne Harvey's Imperial Yellow Queen Stitch Needlecase--quite an impressive name!--which is based on a wallet from the late 1700's. It has a few very good qualifications for a travel project:


It's back in my bag again, ready to go for the next trip, which will be in about 10 days.

Yes, I'm taking two workshops in one month. I'm afraid I'm going to be very spoiled by this.  Oh, to be a lady of leisure and able to wander from one workshop to another!

We loaded up the car fairly early in the morning, hating to leave but knowing we had to go.  Baby Girl decided to do one last sweep of the room. I was waiting at the bottom of the steps, leaning against the car, when I realized she had been gone for longer than it should have taken.

I was aware of a door rattling somewhere, but it was still a little windy and there were other people about, so I didn't give it much thought.

Then I heard my name called from above. Baby Girl couldn't get out of the room.

I hauled myself back up the stairs to our porch. Baby Girl was on one side of the screen door, I was on the other, and she couldn't get out. The latch wouldn't open.

I have had many years of beach trips and mountain trips and stays in various beach houses and mountain cottages. I have learned that salt and ocean spray can either corrode or coat door locks and latches, and that damp mountain air can cause doors to swell and stick. So I have knowledge of how to handle this kind of problem--I pushed in the button on the door and lifted just slightly at the same time, and lo and behold, she was freed!

As she stalked past me, she said, "This is going to show up on the blog, isn't it?"