My thread is possessed.

I decided to start working on one of the discs that needs to be embroidered for one of Amy Mitten's Winter Casket toys.

To begin, you have to work a series of loops for the outside edge of the disc. You are warned that the gold thread needed for this is a little persnickety and you need to only unreel about a foot of thread. The thread should then be secured with a bit of tape to keep the spool from unreeling more.

OK, not a problem--found the masking tape, unreeled the first foot of thread, taped the spool and started on my loops.

After a little bit, I needed to unreel more. So I unstuck the tape so I could start winding off the thread.

And then something weird happened.

The spool literally leapt from my hands, flew four feet away, spiraled and twirled, hit the floor, and rolled.

All I could do was stare for a minute. Then I realized that Dearly Beloved was staring, too.

Now, it could have been my fumble-fingers--I am a noted klutz--but I swear I just untaped the end of the spool and it hurtled itself into space.

Anyway, you're supposed to use a continuous thread for this motif so I didn't want to cut the thread. That would have meant starting over, and I was having enough trouble.

I spent the next hour carefully rewinding the spool, working out the kinks and twists and re-taping the thread to the spool every few feet.

At that point, I needed to assemble the lasagna for dinner, so this is as far as I got on the disc: 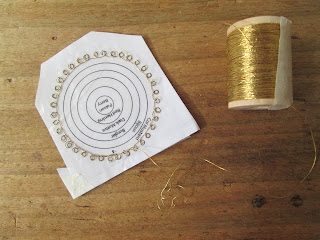 After dinner, I wasn't quite sure I wanted to tempt fate, so I pulled out Fragrant Fragaria and added more leaves and some strawberries.

Ironically, it took less time to get all this stitched than it did to re-roll the spool.
Posted by Ann at 9:50 AM