I finished my first ever Humbug, stitched and assembled. 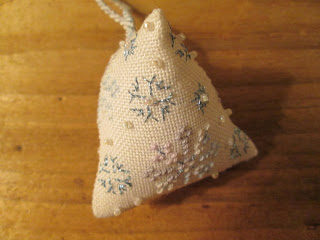 And that is about the extent of the week-end's activities.

We were supposed to go to a wedding yesterday.  We didn't. We didn't even watch the Royal Wedding.

Apparently we had food poisoning.

Dearly Beloved picked up fast food Friday night. I took a bite of one of my French fries and thought it tasted  . . . off. So, like a ninny, I took another bite to be sure it was . . . off. I said to Dearly Beloved that the fry tasted funny.  He said, "Huh?"

His fries were all gone.

I should mention at this point that family lore says that when Dearly Beloved was growing up, he could clean his plate before he knew what was on it. After forty-plus years, he's slowed down some, but still eats faster than anyone I've ever seen.

Anyway, a couple of hours later . . . how can I put this delicately? . . . the tsunami hit. And the storm continued to rage throughout the night.

Needless to say, we stayed close to home yesterday and are just beginning to feel human again. And pounds lighter.
Posted by Ann at 8:26 AM