Baby Girl and I decided that we needed a Girls' Week-end.

There was Plan A. Weather permitting, we would drive to Jamestown for a performance by a re-enactor. (We had planned to do this last year, but I had car problems and we spent the day having it looked at instead of doing anything fun.)

And there was Plan B. Weather not permitting, we were going to have a lovely brunch and an afternoon at the movies.

We wandered around until almost time for the performance, then plopped ourselves down in the area that has been found to have been the site of the first church. The last time we were in this spot was when we came for the wedding of Pocahontas to John Rolfe, 400 years after the original date. 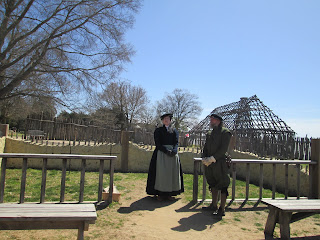 While we were waiting for the time for the performance, we marveled at the way our two actors stayed in character. Mistress Joan Pierce was wearing an embroidered coif that was very similar in   design to the motifs on the jacket that was worn by Pocahontas in the wedding. Baby Girl and I both had the honor of stitching motifs on the jacket and head cloth. Our eyes were immediately drawn to her coif. So I asked her about it.

And she told us that she had embroidered it herself because she loved the jacket design--and then she very quietly broke character so we could talk about how she figured out the pattern and the design. We talked threads. She showed us the small piece she is working on to teach herself detached buttonhole. It is mounted on a tiny slate frame which the gentleman with her made by copying a 16th century frame that had been featured on the UK version of Antiques Roadshow. We had a delightful conversation.

And then she went right back into character and described the horrors of The Starving Time, when the population of Jamestown fell from about 350 to about 60 survivors. At that point, the colony almost failed--yet, through a series of almost miraculous events, it survived, and flourished, and was successful before the Pilgrims ever saw Plymouth Rock.

It was impressive. Even though Baby Girl and I are History Nerds and knew most of the facts she related, her performance literally brought it all to life. We agreed that, despite the length of the drive, it was well worth the time it took to get there and get back.

And then, today, I drove home on a beautiful Easter morning, and I'm back to reality. And the laundry. And Monday is tomorrow and it's back to work.

But the total break in routine was SO worth it!