When I went to work this morning, I discovered that the light panel over my cube was burned out. This meant that I spent the day in a darkened cube--and it was gloomy outside--so I felt like I had spent the day in a cave. I could not wait to get home--well, even more than usual on a Friday because Week-End!!!--to turn on lights and stitch a little more on my little garden. 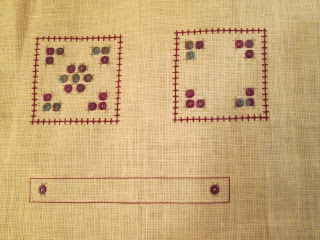 We have leaves and centers on all the flowers.

This was not without angst.

The flower centers are supposed to be stitched with a strand of silk and a strand of thin metallic thread held together.

Well, not so much.

This has been a reeeeeeeeeeeeally long week at work. We decided that Wednesday was like a second Monday. Actually, it was like Monday squared. So perhaps it was not a good idea to try to stitch tonight--but I thought, there are just little straight stitches for the leaves and easy-peasy cross stitches over one with two threads in the needle. I can handle this, I thought.

And the metallic thread made up its mind to be difficult. It snarled and twisted and removed itself from the eye of the needle. It stripped the metallic wrap from the fiber core. It was mean and nasty to the silk, which was cooperating quite nicely.

So I decided that I did not need shiny stitches in the centers of the flowers. I removed the offending metallic and did all the centers with only a strand of gold silk.

Then I decided that I really did want shiny stitches in the centers of the flowers. I was not about to take all those silk crosses out and fight with the double thread again.

And then the solution presented itself. I simply threaded up the needle with the metallic thread alone and stitched over the silk cross stitches. The metal thread, while not playing well with others, behaved when stitched by itself. And now I have sparkle in the middle of the flowers.

And now for something completely different:

I need to add something else to the rotation list. My prework for the class I'm taking from Betsy Morgan at Salty Yarns in June arrived today. 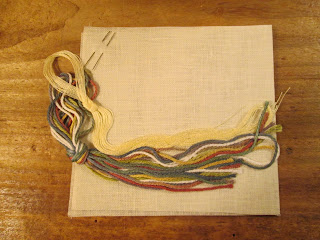 I just realized that two weeks from today, Baby Girl and I will arrive at the Lankford Hotel and Salty Yarns for our classes with Sherri Jones.

And, yes, I'm going to start counting down the days and hours.
Posted by Ann at 6:41 PM